This is the third blog in as series that shares key highlights and learnings from the Ethical Trading Initiative programme ‘Gender Equity Across Supply Chains: a comparative analysis’ initiated by Women Working Worldwide and Banana Link in 2018, and joined a year later by Homeworkers Worldwide.

Through our work producing ‘Gender Equity Across Supply Chains- a comparative analysis’, a library of case studies has been put together to examine the many ways that gender equity in agricultural value chains is being pushed forward.

This work has been happening at several levels – including union, producer and company levels, and through the work of NGOs, such as the three project partners, Banana Link, Women Working Worldwide and Homeworkers Worldwide.

To conduct a thorough analysis of the entire library, a working group was established which set about identifying key drivers of change into three distinct categories: Education, Representation and an Enabling Environment. Within each of these, we discovered a whole host of measures and strategies that can be taken to push forward positive change.

Perhaps the broadest of the three categories is ‘Enabling Environment’. Here recommended measures range from practical adaptations of workstations and equipment, to new legislation as a key driver of workplace change, the acknowledgement of and provision for the different caregiving roles that women fulfil; including childcare and accessible breastfeeding through the provision of breaks and safe and clean allocated spaces. 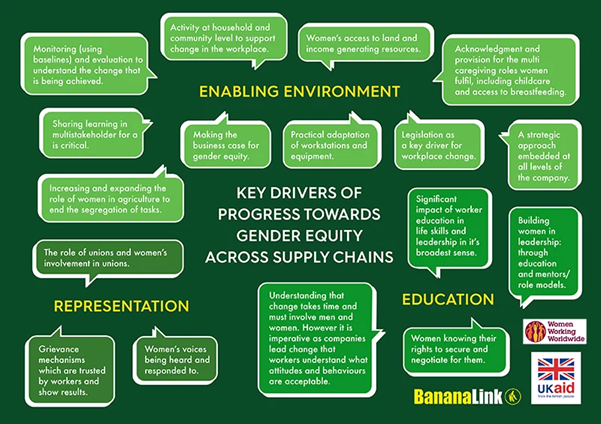 Examples of how an enabling environment can and has been created in agricultural and textiles industries across the globe can be found in the library of case studies. Unions, employers, certifiers and retailers all have a role to play in facilitating this environment. Here are some specific examples of this from the banana industry:

Why are so few women employed in the banana industry?

Unlike other agricultural industries such as tea and flowers, the international banana supply chain is an overwhelmingly male dominated industry. Men occupy over 80% of jobs in the banana export industry globally. In some countries, women make up less than 10% of the workforce. The problem with women’s exclusion from this sector, is that in banana producing regions there are few, if any, alternative sources of employment. This is compounded by the prevalence of single-parent households, headed by women in banana producing regions. These women not only shoulder the entire burden of responsibilities relating to childcare, but are also the sole breadwinner. It is clear that discriminatory practices in the hiring of women workers must be eliminated as a matter of urgency – otherwise it is not only women, but also their children, who will continue to suffer.

Barriers faced by women seeking work on banana farms is multifaceted – women can face discrimination resulting from perceptions which regard them as ‘expensive workers’, due to their rights to maternity leave, and ‘unreliable workers’ due to the demands placed on them by childrearing responsibilities. Sexual harassment at the workplace is also common, and workplaces dominated by patriarchal values mean that effective structures to raise complaints are often not in place, and/or women do not feel or recognise that they are safe or entitled to demand better conditions. This ‘double-workload’ presents another challenge for women wishing to join their workers union or take up a position of leadership within it. Additionally, the lack of women’s representation and voice in leadership at company level and in wider society, simply reflects back to women an image of the world in which they are invisible. Where their views are inconsequential and where their skills are not valued; a world therefore, where women’s needs inevitably remain unmet. 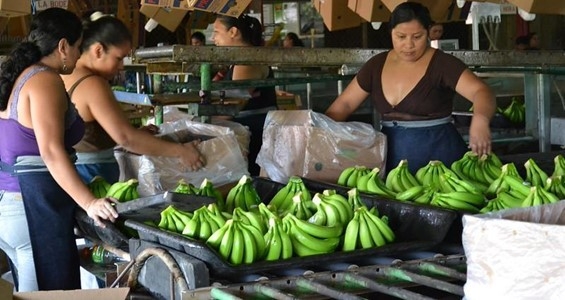 A broader vision of workers, a fairer and more equitable workplace

Within the banana industry, examples of how employers have been able to create an enabling environment can be found in a study on the work undertaken by Golden Exotics Limited (GEL), a subsidiary of Compagnie Fruitiere. GEL is the biggest banana producer in Ghana, with some 2,500 employees. At the beginning of the project, 92% of the workforce were men. To tackle the exclusion of women, a research project was undertaken to understand the problem in detail before developing a series of short, medium and long term actions. These aimed to remove barriers to women’s employment and create an enabling environment – they included the provision of childcare, a gender sensitive occupational health and safety (OHS) review and the implementation of a short-term loan facility.

A study on SITRAP – the Costa Rican Union of Agricultural Plantation Workers – provides an account of what a union can do to create an enabling environment for women. Importantly, the study shows that the provision of childcare at union meetings and events, and holding events close to where women lived, proved a crucial enabler for women’s participation, just as childcare on farms allows for women’s participation in the workforce. The benefits of ensuring union meetings are women and child friendly is clear:

“Women who join the union will often bring their children, their partners, their neighbours and friends to union meetings, and in this way awareness is spread and union membership continues to increase” commented Didier Leiton, General Secretary of the union.

There are many other examples within the library that all point to the need for a broader perspective when viewing the barriers to women workers inclusion and promotion in the workplace. Workers are often viewed as self-contained individuals, but in reality, we all exist in a complex web of relationships and responsibilities. These dictate the time we are able to devote to paid employment, but also the sense of empowerment and confidence we possess to speak up and defend our rights, to state our needs or to take on leadership roles. All workers, but especially women, must be understood and respected in this broader perspective in order to create a fair and equitable workplace.