Blog: Côte d’Ivoire: Preparing for multi-stakeholder efforts to achieve decent remuneration for all

Following a recent visit to the country, Banana Link International Coordinator Alistair Smith and Project Officer Agathe Caublot report on an initiative to address low wages in the Côte d’Ivoire banana industry, including training workshops for plantation workers’ trade union representatives to equip them for effective engagement in social dialogue.

There are now around 15,000 permanent workers employed in Côte d’Ivoire’s banana plantations. The country has become Africa’s leading exporter of dessert bananas, selling the vast majority of its export production in Europe, particularly in France.

It is now several years since the trade unions in the sector alerted Banana Link and International Union of Foodworkers (IUF) to the unsustainably low wages received by many men and women working on the plantations and in the packhouses of a country still undergoing a significant banana expansion.

There was also a concern expressed by workers that women were not being paid the same as men. As one worker put it during last week’s training workshops for trade union shop stewards and leaders: “When I started working for the company ten years ago, the men were paid 900 CFA a day whilst women only received 750.”

One of the factors in the low wage levels is an agricultural minimum wage (SMAG). Côte d’Ivoire’s Labour Code prescribes that the SMAG should be revised every three years, and yet the most recent and only increase in the last two decades occurred in 2013, when it was brought to just 36 000 CFA per month. This current level is just over one third of the 2020 Anker Living Wage Reference Value and just 60% of the minimum wage for all other sectors of the economy. 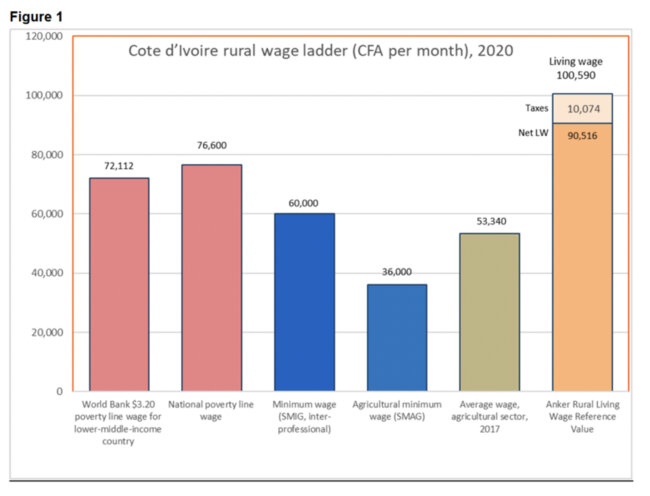 A multi-stakeholder project is born

At the initiative of Banana Link and one of the leading buyers in the country, a programme to prepare the sector to move towards decent remuneration for all was designed and presented to the IDH Sustainable Trade Initiative for support. The programme, co-funded by five continental European and British retailers (Tesco, Carrefour, Lidl France, Morrisons, Marks & Spencer), was launched this month.

The programme consists of trade union capacity building workshops for workers’ representatives from all the major banana companies in Côte d’Ivoire, followed by a data gathering process on current wages and allowances led by an independent research institute CIRES, based in Abidjan, in at least three of the main exporting companies. The data, broken down by category and gender of worker, will be presented to the trade unions for verification and validation. The agreed data will then serve as a common basis for collective bargaining towards living remuneration.

The retailers supporting the project have agreed to the principle of shared responsibility. They will participate in the final event in early 2023 at which wage gaps will be presented by the companies and trade unions. Based on these verified figures, buyers will make commitments to cover the gaps through the price paid for the fruit they purchase. One leading retailer has already made a public commitment to cover the wage gaps in proportion to its purchases, and others are expected to follow. 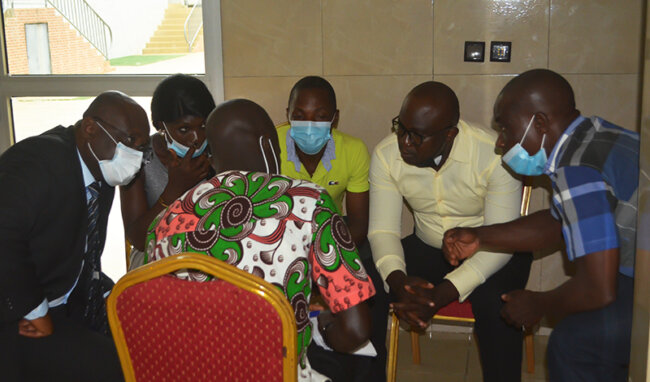 The importance of good faith social dialogue is key to effective collective bargaining, as is having agreed data that workers and their employers can present to buyers to demonstrate the gaps between current remuneration and the reference value produced by the Anker Research network . A key subject which was discussed throughout the training workshops and discussions with companies was the importance of having well-organised trade union platforms that are effectively trained in productive collective bargaining, with a clear understanding of workers’ rights and responsibilities – as opposed to a plurality of small, poorly organised and unstable unions. Techniques for responsible negotiating practices, as well as the concept of shared responsibility and the importance of women’s participation in bargaining, were some of themes covered during the interactive sessions.

Women workers have a key role to play

The second workshop was for women workers and leaders under the title “Women workers and decent remuneration in a context of social disparities“. Several of the women had also taken part in the first workshop and were able to support the facilitation of the second set of training activities. Covering similar themes and activities as the first workshop, women participants committed to share learnings on their return to their workplaces and to collaborate with their male colleagues in the process of raising awareness amongst the wider workforce of the process under way.

For around half of the worker participants this was the first time they had had an opportunity to take time off work for training. As well as being grateful to their employers for granting time off work for the activity, the comments during the final evaluation session speak of the vital need for empowerment through training if the process towards decent remuneration is going to succeed:

“We as women are finding our voice; we have a role to play in discussions with others and in training our colleagues. Women are strong“.

“I didn’t know anything about my rights and responsibilities at the outset. You have helped us feel confident. I know I can walk now!“

Banana Link believes that the banana companies in Côte d’Ivoire have shown real courage in supporting the approach of dialogue and bargaining. We reissue the call made last month to all retailers to follow the example set by Tesco and ensure that the wage gap – between actual remuneration and a level that allows a decent living for workers and their households – is covered through the prices they pay for the fruit. 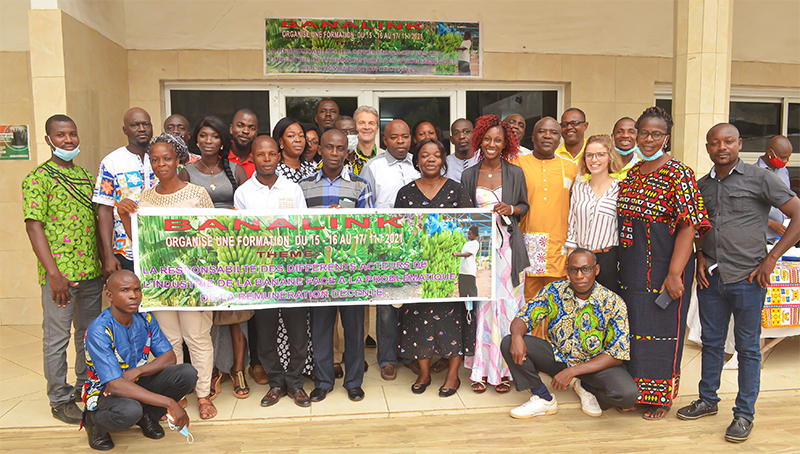