Thanks to support from Banana Link, the new banana workers trade union in Ecuador, SINUTRABE, was able recently to hold its first Women’s Workshop for women representatives.
Ecuador is the world’s largest banana producing country. However, women represent only 5% of this workforce because they are viewed as ‘high cost, high risk’ employees. Women workers face discrimination, harassment, and multiple health and safety risks, and are often unaware of their rights and how to defend them. This is exasperated by trade union discrimination; less than 5% of Ecuadorian agro-industrial workers are organised.
The workshop, attended by representatives of the Association of Banana Workers in Pasaje Canton (El Oro Province) and from the Association of Workers in Guayas, Los Álamos and Pechichal, discussed labour issues facing women on the plantations, along with the new ministerial agreements on working practices in Ecuador’s banana industry.

Workshop attendees, with Carmen Banegas Yunga, SINUTRABE Women’s Officer and workshop coordinator (in red).
Women’s rights still being violated
The workshop confirmed that women’s rights are still being violated and, moreover, employers are failing to comply with the Ecuadorian Labour Code’s provisions. Workplace exploitation and sexual harassment still exist and women employees with the longest service with the same employer are being bullied into retiring and not claiming their statutory occupational payments.
In the EL Oro Province, women working on the packing crews are paid $ 6.00 to $ 12.00 a day for two or three days a week. This does not, however, include any meal assistance from the company for those workers who work the entire day, which means that the women have to sort out their own food and only have 10 minutes to do so.
Employers in the companies with trade unions are now dismissing their long-standing workers who enjoy employment security and making them sign “voluntary” resignations. They are then being replaced by new staff. All this and more is happening across the banana plantations and the entire agro-industrial sector in Ecuador.
Fighting for women to play a union role
Workshop attendees were grateful for the opportunity to share experiences from different plantations and expressed their eagerness to fight on for union organisation and for women to play an increasingly active role in trade unions and to be involved in their leadership. 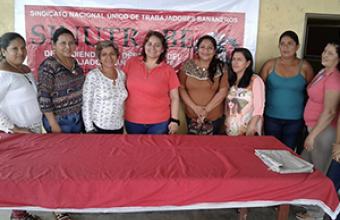