Banana producers from African, Caribbean and Pacific (ACP) countries last week launched the “Appeal of Abidjan” to defend their interests on the European market, with the aim of persuading the EU to safeguard the interests of ACP producers, in the face of the erosion of preferential tariff rates for ACP bananas.
This follows the recent announcement by the European Union that its support to the banana sector in Africa, to face the Latin American competition, will not be renewed after 2019. An EU aid programme to the ACP countries, launched in 2013, had aimed at improving competitiveness, the environmental conditions of production, the quality of life of workers, while also developing the local and regional markets.
The Appeal was launched last week at a meeting of ACP producers in Abidjan, Côte d’Ivoire, with delegations from banana producers, including Assobacam (Cameroon), Obam-CI and Ocab (Ivory Coast), Adobanano (Dominican Republic), Banana Producers Association (Ghana), as well as Asprocan (Canary Islands) and the association of Madeira banana producers.
The Appeal contains three main demands:
1. That the EU confirm its commitment not to lower tariffs applied to Andean and Central American countries below €75/tonne and to maintain this commitment by not proceeding to dismantle tariffs.
2. That a regulatory mechanism be adopted to replace the stabilisation mechanism set forth in the agreements with Central American and Andean countries, whose application is coming to an end. The appeal recommends that a mechanism be devised after consultation with stakeholders, with new and more transparent evaluation criteria and effective intervention.
3. That a new support programme be set up to respond both to specific national strategies and to the global strategy of ACP countries to facilitate private sector investment in developing local production capacities.
“The banana sector represents more than 60,000 direct and indirect jobs in Côte d’Ivoire, Ghana and Cameroon,” explained Jean-Marie Kakou Gervais, vice-president of the the association of African fruit producers and exporters (Afruibana). “It is an industry that plays a vital role in rural areas in terms of development, job creation and settlement creation.“
Alistair Smith, Banana Link’s International Coordinator added: “If African and Caribbean producers are squeezed by a lower and lower tariff differential, then the risk is that the improvements that are currently taking place will be sacrificed on the altar of competitiveness.“
Bananas and Brexit Britain
In a separate but related development, the African countries of Ghana and Ivory Coast are negotiating their possible access to the United Kingdom in case of a hard Brexit. Meanwhile, the countries of the Caribbean could already have an agreement with the UK to maintain the same conditions that their bananas have in the rest of the EU.
The United Kingdom is the EU’s second-largest market for bananas in terms of volume. Nearly 1.1 million tons of bananas, i.e. more than 16% of the total volume of the EU market, were marketed in the United Kingdom in 2018. Over 60% of that amount comes from the Americas (Colombia, Costa Rica and Ecuador are the biggest supplier countries), and about 300,000 are imported from countries in Africa and the Caribbean. In the specific case of Africa, nearly 110,000 tons of bananas are imported from Cameroon, Ivory Coast and Ghana per year.
Given these volumes, the possible effects generated in the EU as a result of the agreements that the United Kingdom can reach with the exporting countries of America and Africa are very relevant, as, if there is a transfer of banana imports to the continent, they would reach an already saturated European market. The total import value of the Community banana market has decreased by more than 12% in the last three years as a result of the over-importation of bananas from third countries.
Sources: Fruitnet, Fresh Plaza, Le Figaro 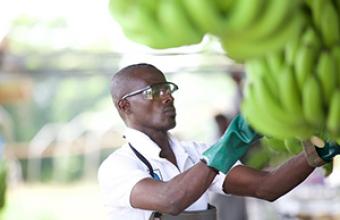