Workers in the Ecuadorian banana industry have told Banana Link that they are seeing rapid downward pressure on wages and contractual conditions on plantations as result of the availability in the country of cheap migrant labour from Venezuela, writes Banana Link International Coordinator, Alistair Smith. Currently these reports are anecdotal with any formal study on the impact of Venezuelan migrant labour on the Ecuadorian banana industry yet to be undertaken.

Workers in El Oro province, members of the Asociación 12 de Octubre de Trabajadores Bananeros del Canton de Pasaje affiliated to the national federation SINUTRABE, have reported a drastic effect on wages in their area. Male workers who were previously earning up to $40 a day are now earning $25 for the same job, whilst women casual workers employed in packhouses who were previously taking home $15-18 a day are earning $10-12 today. Where many used to be hired for four or five days a week, they are only being hired for two or three days now. Where workers had permanent contracts, increasing numbers are now hired on ad hoc basis.

This loss of job security is directly related to the introduction of legislation that increased the “flexibilisation” of labour, enacted by the Moreno government in 2020 under the guise of the “Humanitarian Law” during the worst days of the pandemic in 2020, according to the Association.

One woman worker reported to Banana Link that there is also now a very real gender pay gap, where she and other women are being paid very substantially less per day than their male counterparts for doing the same job.

The flux of Venezuelan migrants in the last three or four years has provided employers with a workforce whose desperation to provide for family back home makes them attractive to hire on banana plantations, displacing local Ecuadorian workers or forcing down their wages. Migrant workers are willing to work for less and to accept poorer labour conditions. Their precariousness makes them far less likely to raise complaints about low pay or poor working conditions.

Reports indicate that employers are offering Venezuelan migrants lower wages, sometimes linked to accommodation in their plantations, and preferring to hire them rather than their Ecuadorian counterparts. Ecuadorian workers, we are told, are expected to accept the same working conditions and pay or find work elsewhere. This situation unfortunately appears to be undermining the good work done in the period 2008 – 2017, when the then government raised minimum wages towards a living wage threshold, and even enshrined a living wage in legislation.

Another factor compounding this deteriorating situation, independent of the impact of Venezuelan migrant labour, is the number of workers across the industry who no longer benefit from the social security system because they are not being registered by their employers with the IESS (Ecuadorian Institute of Social Security). Some unofficial reports state that this now concerns the majority of workers in the banana sector.

The phenomenon of banana producers taking advantage of migrant workers to push down wages in banana export industries is nothing new, with the majority of the workforce in many Latin American producer countries comprised of “cheaper” workers from poorer neighbouring countries. Nicaraguan migrants in Costa Rica, Central American migrants in Belize or Haitian migrants in the Dominican Republic, for example, have all been used to bring down – and keep down – wages in the respective industries.

Producers under pressure from the market

Behind this deteriorating situation for banana workers in the world’s biggest exporter country is the direct external pressure on producers to cut costs in order to remain solvent. The press has widely reported the lower and lower contract prices from big buyers in recent years, especially amongst major retail buyers from Germany and the UK.

Indeed, Latin American producers have issued stark warnings that the industry itself is under threat if prices do not increase to reflect the increasing cost of production- from implementation of COVID-19 and TR4 related biosecurity measures, to the rise of maritime freight costs by 62% and the increasing cost of inputs such as fertilisers, plastics and cardboard. The requirement to comply with new minimum residue levels (MRLs) for export markets and increasingly stringent certification requirements also have a cost, they say.

As long as the downward pressure on prices paid by major buyers continues, the risk remains high that producers will look to make savings where they can, and it is often workers who pay the price. The reports from workers on the ground remain to be confirmed by independent studies, but meanwhile the successes of a decade of positive progress in the social and economic conditions for Ecuadorian banana workers is very seriously threatened by this convergence of factors that need to be investigated and addressed by all concerned. 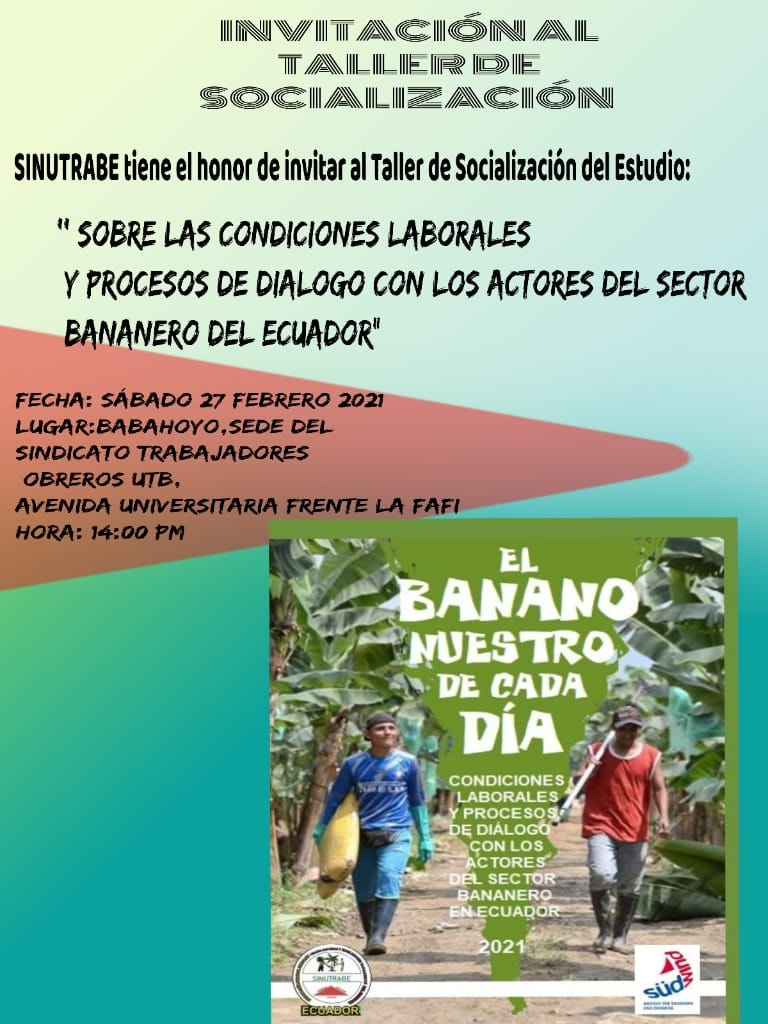